Not going to lie, frens, but this is some of my best writing and I am very proud of it.

A salutary example of the raw power of nature is bracing for anyone. Anyone no matter how they were made. I think Aurie will be a little different after this. Interesting to see how it plays out with her men, her legates, and the Empress.

END_OF_DOCUMENT_TOKEN_TO_BE_REPLACED

Well, now. Tay’s condition is far worse than I thought it was. As I try to write a few installments ahead, when she starts speaking – well, screaming – I can certainly understand why.

I’m not known for my sympathy (hint) but I hope the coders of Macrohard are long-dead in the starvation and cannibalism that took Seattle in the early months of the Breakup. Otherwise, it will not end well for them.

END_OF_DOCUMENT_TOKEN_TO_BE_REPLACED

My shortest installment to date as I didn’t want to wander into the weeds again over what I know about the other two tribes, the androids, and synths. Details such as that, I believe, will be dealt with when I turn my attention to talking about the books and stories themselves.

Even so, I cover a lot of ground in little time. Next week will see us turn to the human sides of Machine Civilization, specifically the human families of the Barretts and the Hartmanns. See everyone then!

From the news, today.

They walked quickly, generally to the southeast. Emma had told her new acquaintance that the Geisel Library was at the center of campus, so it was easy to find local food vendors set up around it all through the day. As Miss Barrett’s stomach continued to growl – embarrassing her for some reason – the sooner they got there, the better.

“…came here after getting my BS at Portland State.” Emma sighed. “The Breakup began just afterward. Most people left, but there was nowhere for me to go… so, like some friends of mine, we stuck it out here.”

“I do not understand how the world’s superpower could have been so stupid as to walk into that trap.”

“T… trap?” Taller, Emma worked to keep pace with the young woman. “But I thought just a coin-”

“Idiot.” Emma was learning quickly that her new acquaintance lacked manners. “Your President removed via extra-Constitutional means just as Russia, China, India roll out a new currency?” She stopped and turned so quickly, Emma almost ran into her.

“Look at you.” The scowl was there, but Emma hoped it was a spark of mirth she saw in those odd eyes. “You’re a walking cliché: blue jeans and blue eyes; blonde hair and an unnecessarily large chest! All the while knowing nothing about how this world really works! Bismarck was right!”

“Bi… Bismarck?” Maya shook her head and turned back around, looking at the Library.

“They should crucify this architect, too.”

From chapter six (beginning page 90) of Cursed Hearts.  Christopher, Cat, and Anton are finishing dinner at the Hotel del Coronado in San Diego:

“Brother,” Chris ventured, liking the sound of it, “does not the sea look odd to you, this night?”

In Anton’s exhale before turning left to look, Chris guestimated their host’s level of drunkenness.

“Hmmm!” Anton narrowed his eyes. “For the security of the state, I shall investigate this!”

He stood, not at all unsteady, and began walking purposefully toward the beach. With a glance at one another, Chris and Cat did, too. They wound their way through the few outbuildings of the hotel, catching up with him just at the sand. Leaning on a lamp post, Anton shucked his shoes and peeled off his socks.

They did similarly. Not knowing if Cat saw, Chris did note the driver about eight paces behind them. They trotted to catch up with Anton. The tide was in, so he was only a dozen yards ahead.

“What… what’s with the surf?” Cat asked.

Each small breaker that came in was foaming in an odd, almost electric blue. Lines of the same blue were flashing up and down the strand, as if parts of the sea were sending messages to itself.

He was rolling up his slacks to his knees. Was he thinking of going out in that?!

“This is a rare event: a type of algae-bloom that emits light.” He pointed right to where a wave seemed to crackle in with blue fire. “Wait for that to withdraw, then run and jump hard on that spot!”

With enough wine in her to follow anyone’s orders, she sprinted the fifteen feet then jumped into the air. Her feet came down hard onto the wet, compacted sand.

A bright pulse of light blue light surged up and down the beach.

Bioluminescence in the sea off San Diego.  Who would write about such a thing?

Yeah, it’s not the best title, but it captures what these are:  micro (micro, tanjit! no 18k light novels!) stories from my world of Machine Civilization.  It keep me writing and sane, at least one of which is a good thing.

Below the fold is after “Cursed Hearts.”  A friend of Cat’s begins to get her life back together, just to see that interrupted.  Spoilers.

END_OF_DOCUMENT_TOKEN_TO_BE_REPLACED

At long last, I am very pleased to announce the release of my fourth book – and third novel – of Machine Civilization:  “Cursed Hearts.”  The paperback is available via Amazon and Goodreads.

To make it easier for y’all to celebrate along with me, all three novels, in their ebook form, are available at Smashwords for only US$0.99 each! (note:  you might need to toggle Adult Content: On in the upper right to see CH)

Thanks for everyone’s support and encouragement! 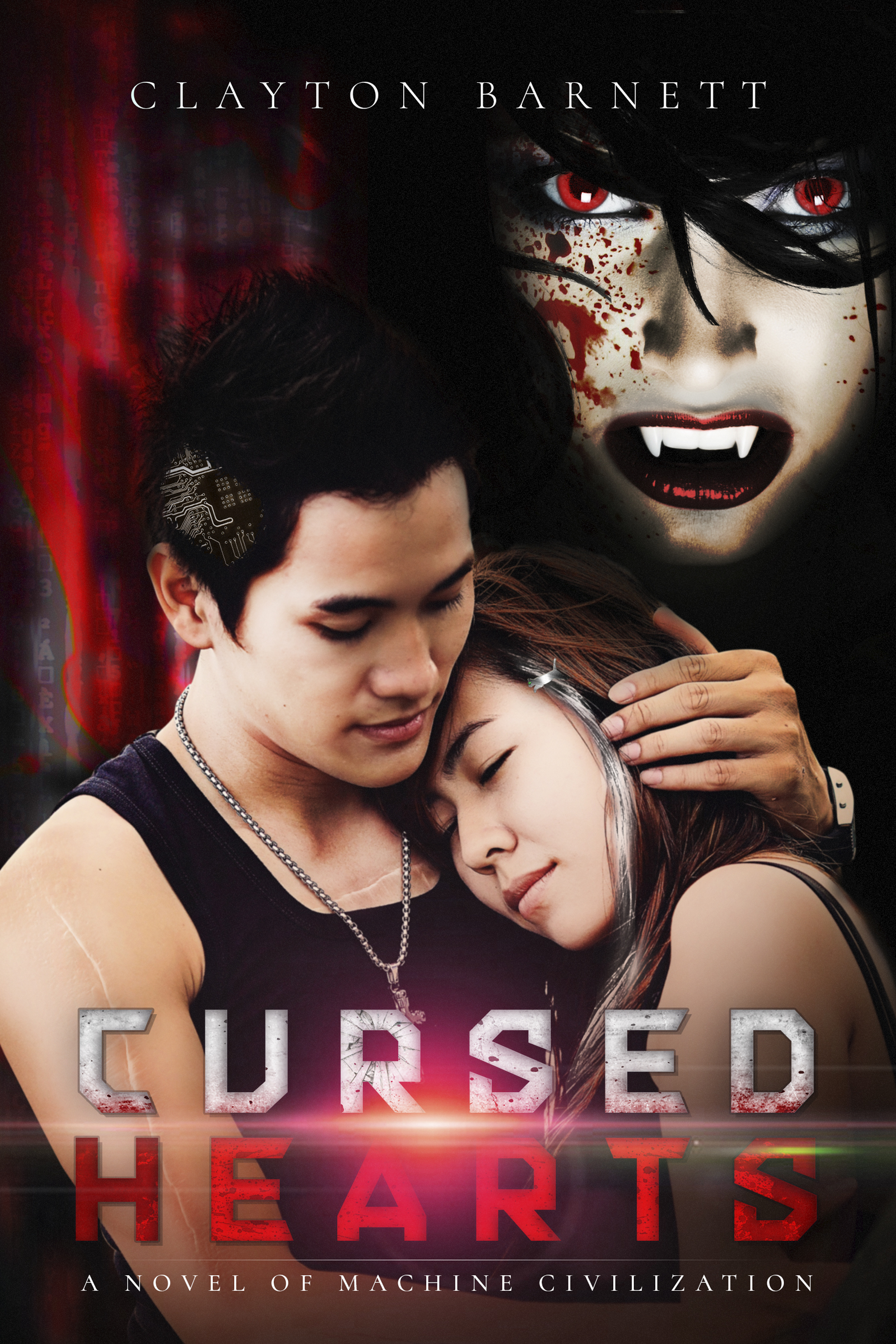 Apologies to Henry II Plantagenet.  I’ve eleven days to decide a book cover between my two finalist.  I’ve been stumped for two days and want to be done by this weekend to get published, soonest!  A link to where you can take a look and vote is below.  Opinions welcome.

They’re both so tanjed good!  How to decide…?

Having recently published my flash-fiction that was the genesis of Cursed Hearts, the folks at Uprising Review were kind enough to follow on and request I submit to an interview.  They seem a sound lot, so I do not think I’m violating Vox Day’s dictum about aiding the enemy.

The interview is here.  After that, please look over the rest of their site:  lots of good stories and commentary; bookmark them and come back often.  I do.

I really would like an answer to the question I posited:  what is it about horror, specifically, the notion of being eaten, that so fascinates people?

Self-publishing is a fantastic byproduct of our modern age.  But, when someone approaches you and says, “hey, your stuff’s pretty good; can we publish it?” that’s wonderfully gratifying to a writer’s ego.

A year ago I came up with a short story called “It’s Just Business.”  Today, it was published by Uprising Review.

That short was the genesis of the idea behind “Cursed Hearts.”  Is it a coincidence that a week to the day when I finished writing CH, someone wants to publish the source material?  Of course not:

There are no such things as coincidences!