Sorry for the quiet… when the H1B’s at Kindle fixed one problem with the cover of “C&DC” they broke a different part.  Trusting them not at all to not screw it up again, I used my very limited Acrobat skills to make a change and submit it.  With chance and luck will hear something by Monday.

With that – hopefully – behind me, I’ll be looking about for a copyeditor and cover designer for my short story collection.  I’m still tinkering with that MS a bit but still look to a publishing date in early March.

As for this weekend, it is once again Ohayocon here in central Ohio!  As each year there are fewer and fewer panels that interest me, we’re only staying one night at a hotel next to the convention center.  Daughter #1 in even driving down from college to attend; I believe she’s cosplaying Weiss from RWBY.  Me?  After sounding the waters on Instagram, I dusted off Elias Ainsworth from “Ancient Magus’ Bride,” for Saturday.  Come Sunday PM, I hope finally to re-read my notes and start in on Part 2 of Crusade.  Cheerio!

END_OF_DOCUMENT_TOKEN_TO_BE_REPLACED

Yes:  dark again.  But for many reasons, good, other, bad.

For the Good, below the fold you’ll find a couple of pix of me and my wife at central Ohio’s largest animecon, Ohayocon.  For Friday I reprised my very popular Elias Ainsworth (Ancient Magus Bride)… over 500 pictures of me.  Saturday, the missus and I were White and Red Blood Cells (Cells at Work); pictures?  Not so many.  Still and all, it was great fun for us and for our daughters.  Poignantly, Daughter #1 (in green) will be off to University in the Autumn… will she join us next year…?

A few days after that, at 53-year-old I’d my first colonoscopy.  While all seems well, no, I’m not posting pictures from that.

Quickly following on, Daughter #2 succumbed to con-funk, which she passed onto my wife – who now has bronchitis – and later to me, who, after suffering with a URTI for a fortnight, am finally getting better.  And I refuse to discuss yesterday’s blood-draw where I seized.  First time in a quarter-century.

Part two of January in 24-36 hours… great things are afoot for Machine Civilization during the month of February!

END_OF_DOCUMENT_TOKEN_TO_BE_REPLACED

Magnificent title.  Short version:  it was a lot of tanjed work!

Following a suggestion from fellow author Jon Del Arroz, I decided, as I was finishing up “Friend and Ally” to write a sequel and release it within a month of the first.  That entailed coming home from DayJob, pushing aside the concern of my wife and daughters, drinking far too much, and writing.  The manuscript of “Foes and Rivals” was ready more than a month late.  My copy-editor did yeoman’s work in getting it back to me in two weeks.  Via Gab.com I was able to make a contract with a US Army vet to make the cover.

I realized about two weeks ago that, as a result of this push, while I took a day off every few months, I never had a vacation.  Hell, I didn’t get further than 30 miles from my house for the entire year!  This cannot continue.  I no longer care what it does to my continued employment prospects:  I’ve nearly 250 hours of paid-time-off and by-God plan to use them.

My first thought was, around my girls Spring Break, take a drive down to Knoxville, TN, to do some on-site research for my next novel.  And, just to get the hell away.  Thing is, that wouldn’t be until March 25th; I’ve already 23k words for this next story down.  Barring a medical disaster in my family, I’ll be finished by then.  I guess I need to think of something else.  If my mother-in-law would be kind enough to shuffle off her mortal coil we’d all go to Japan for two weeks…

Anyway.  Having said all that to say this:  I realize I’ve been dark and quiet on this blog for some time.  It is, honestly, easier for me to dash off a thought on Gab than sit down and put a post together, but I do owe it to all of y’all for putting up with me.  I’ll definitely try harder, especially as I’m putting together another virtual book tour, not for Nichole 5’s new books, but all five of the novels of Machine Civilization.  That will hopefully come together some time in early February.

Between now and then, we’ve Ohayocon on January 11-13 and I’ve my first ever colonoscopy two days after that.  Let me assure you I’m really looking forward to one of those.  Below the fold is me testing my cosplay for Saturday.  In the mean time, here’s the linx for Amazon and Smashwords for all my stuff.

Thanks, everyone.  Happy New Year!

END_OF_DOCUMENT_TOKEN_TO_BE_REPLACED

I’ve never had much use for “the Holidays.”  I am asocial and dislike the dark of winter.  Even as an orthodox Catholic, Christmas is just a matter of “meh” for me.  And this year, things preyed on my mind.

Yes.  Yes there is:  in abandoning writing, I’ve abandoned myself.  I’m dying; at a rather astonishing rate.  I do not want this:  I’ve glimpses:  Gary & Henge, older, trying to talk out where and what to do with their love for one another.  Nichole5 stands with Togame atop the New Tokyo Tower, with its Reactionless Thruster crown, talking about off-world colonies.  Editing Pirate Twins into a light-novel-with-pictures or a graphic novel…

I’ve so much to do, and I’m sick and tired of being sick and tired.  Lent and lighter evenings are upon me; I’m not one to “give up” as I’ve so little.  Instead, I shall take on:  my father-in-law’s history, Machine Civilization’s new stories, things I cannot imagine.

Apropos of this, below the fold is the utterly astounding artwork of Matt Michallow of StarArtWorks.  He, through me, the guy wearing his art, owned Ohayocon, the largest animecon of central Ohio, two weeks ago.  Over 350 pictures taken!

END_OF_DOCUMENT_TOKEN_TO_BE_REPLACED

Friday PM, a looooong walk from the action of the rest of central Ohio’s biggest animecon. I was to give a talk on Creative Writing & Self-publishing.  I expected 3.  Maybe 5.  Ten minutes before the talk, doors open.  18 came in.  I had 15 hand-outs.

Ten minutes later, when I stand to begin my talk, there are just over 50 people.  I reach down for the water bottle, think better of it, and reach for my flask of bourbon, instead.  I raise my head and smile like Milo does.

“Thank you so much for coming all this way!  You’re obviously not here by accident, so let’s get to it!”

One full hour later (the con changed the format so we really get a full hour) completing both my presentation and the dozens of very good questions  (barring, well… never mind), I’m shaking hands, signing & selling books, suddenly the room’s empty.   I look at Daughter #1.

Later this evening, people from the panel stopped me in the halls of the Columbus Convention Center saying, “Thanks so much!  I’m going to start on my book tomorrow!”

Being an asshole, I do what I do:

Fantastic panel, fantastic group; thanks be to God!

Script for Ohayocon 2017 talk* about Creative Writing & Self-Publishing:  complete (and revised after I found out yesterday that I’ve about ten more minutes!)

Outline for my long-delayed music video, ‘Lightning Across Clearest Blue:’  complete and in the hands of my collaborators.  It’s now up to those “visual” artists to turn my lifeless outline into something that get us about 250k pageviews.

*They’ve put me in a convention center room that likely seats 200.  On a Friday afternoon, far from the main action of the Con, with a hyper-specialized topic.  I’m anticipating 2-3 attendees.  Five, tops.  Oh, well:  that much sooner to the bar, I suppose.

Whew!  Finished the ‘script’ that I’ll be using with my Powerpoint slides in twelve days at my presentation on Creative Writing & Self-Publishing at Ohayocon.  I’ve much ground to cover, and – since I’ll be a little drunk – cannot allow myself to get side-tracked, so I’ll have a written script in-hand to keep me on the rails.  I’ll likely as not tweak it a little, but that’s one less thing to fret over.

Have to work a short shift tomorrow (ironically with the woman who’ll be starring in the music video I need to finish) so perhaps I can take all my hand-written direction notes for what I’m provisionally calling “Lightning Across Clearest Blue” and type them up and get them to the rest of the team.

What?  Work on ‘Cursed Hearts’?  Never heard of it.

END_OF_DOCUMENT_TOKEN_TO_BE_REPLACED

Haven’t posted as, honestly, there was nothing to say.

Work continues on Cursed Hearts, slowly (it would be oh-so simple to turn it into a novella of 30k words; I’m resisting that impulse.  For now).

I’ve the outline of what looks to be a 11-slide Powerpoint presentation for my Creating Writing/Self-publishing panel at Ohayocon in mid-January.  After a year of watching Milo speeches, I find myself using his voice in my head as I write.

This morning made a re-revision to the images I’m thinking of using in a fan-video; a joint venture of 3-AR Studios LLC and Star Art Works LLC.  I need that in the hands of my collaborators no later than a week from today so they can add/delete/change it.

It’s fascinating to me that the world of Machine Civilization I’ve created is open and flexible enough to swallow all of my other works.  As a former Systems Engineer, I’m absurdly pleased about that.

Christmas break for my girls, so no shuttling them about pools.  I’m hoping for productive evenings this next two weeks.

Ii don’t care that CH is a commercial product (well, yes, I do; that’s not my point) so I’m going to continue sharing snippets here. END_OF_DOCUMENT_TOKEN_TO_BE_REPLACED

NaNoWriMo passed yesterday.  As I expected, I was no-where near finished, much less to 50k words.  Which is fine:  I’ve many other things pressing for my time, and I’m finding the characters engaging and the genre a good challenge, so I don’t want to rush.  Still:  deadlines.  So, I think I’ll set Christmas as my writing stop-date.  As I’m guesstimating that this one will be a little longer than my first two – maybe 65k words – that’ll give me January to… hang on, something just came in on my ‘writer’ email….

Oh.  It appears my one-hour panel, ‘Creative Writing and Self-Publishing’ for Ohayocon 2017, in Columbus, Ohio, has been approved.  Sure be nice if I could give a more current example than 10-month old Echoes of Family Lost.  Hmmm.  January 15th….

‘Scuse me:  I need to go make some coffee for tonight.  I’d best see how Maya gets her memory back so she can start killing people again.  Cheerio!

Anyway.  Ohayocon was qualified fun:  the local hotel was undergoing remodeling – which was a huge bother – the staff was over-the-top-helpful this time, only 5 of the 6 panels I went to sucked ass*, and my girls – off on their own – did not get molested.  And, back in the room, post-chemo wife was chill.

In the Dealers Room, found some Aria swag for myself and a gift each for my two pharmacist sempais.  And several gifts for my sick wife.  Took only a few pix, see below, but many conversations.  I do so love our animecon kononia!  Some great after-con talks, too:  hi, Beck! (get those lymph nodes checked out!)

*Hosting a panel is so simple; I thought.

Note to those making a panel:  Powerpoint, stick to your topic, crush trolls, answer questions. 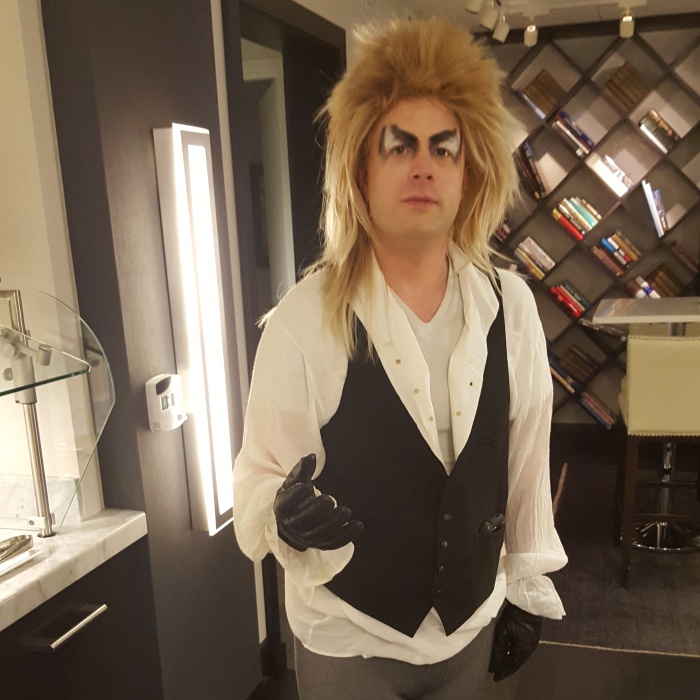