A still from the song “Tokyo Girl” from Perfume…  below the fold, an excerpt from a short story I wrote about it. 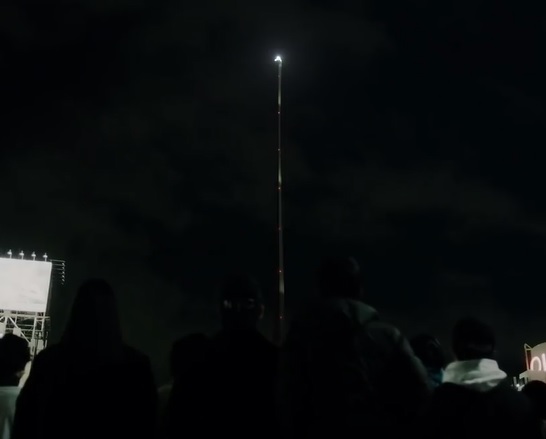 Entering the New Tower District fascinated her: so much activity! Before China had crushed the KFR in then-North Korea, that government died in a flurry of missiles all about northeast Asia. A few had atomic warheads. The one that hit here did, but did not detonate. Still, the impact had been in and onto one of the legs of old Tokyo Tower. Safety concerns necessitated it be torn down but nothing had been done to replace it.

Until her… friend… did.

Nichole5 could not suppress her tiny smile.

One of the first decrees of the newly enthroned Empress Togame was the construction of a new tower. Not something to replace Tokyo Tower but to succeed it.

She paused, looking from the base, up. Way up. The sun was just setting but most of it was still illuminated.

Narrow. Three sided. The base covered several acres. It had to, for stability. She leaned back. The apex was exactly one kilometer above her. Using the most advanced materials in the world. Many in the Diet had criticized the expense; a vanity project, they called it. Breaking yet another tradition, the Empress herself appeared before the MPs and threatened to dissolve them. The opposition backed down. For then.

Nichole5 was aware of a few other people about her, also admiring the view. Officially, it was still Tokyo Tower.

Everyone called it Togame Tower.

“Isn’t it supposed to be done in a week or so?” Some man to her right asked the evening air.

“I’d heard it is done, but Miss Fancy Pants has some surprise,” a rougher male voice from behind her.

“I do not wear ‘fancy pants,’” said the young woman just at Nichole’s left. That voice!

Nichole looked left just as the young woman turned to the one behind them. She wore an elegant yellow and white yukata. Her hair, just a little shorter than Nichole’s in a style of few tiny complex braids that was all the rage right now. Sunglasses occluded her eyes.

“And who are you, little missy?” The man challenged.

She pushed her glassed up onto her forehead.

Now recognized, everyone about them bowed deeply. Except him.

“It’s a waste of money. And, you shouldn’t be on the throne!”

Nichole was amazed at her friend’s composure.

“Perhaps one of those statements is true.” A small roll of her shoulders. “Perhaps both? Or, neither. Time will tell.”