…to 11.  I ran across the NSFW drawing below the fold.  For some reason, I knew there was a story there, but I couldn’t see any of.  A couple of nights ago, I texted a friend about it.  He suggest ‘android vampire.’

I already have those, in story form, if our webcomic of “Poisoned Hearts” ever comes out.  So . . . what else?  Hmmm.  Of course!  Make it even more horrible!

This was an interesting exercise for me:  I really don’t do horror (well, I guess I do now) so even these 1400 words took a couple of days to get right.  In fact, I sat on it for an extra 12 hours, unsure about a few things.  Just a few minutes ago, I added two, short, lines.  Better.

I’ve the start of the next Ep of “Defiant,” and hope to have that out late tomorrow.  Cheerio! 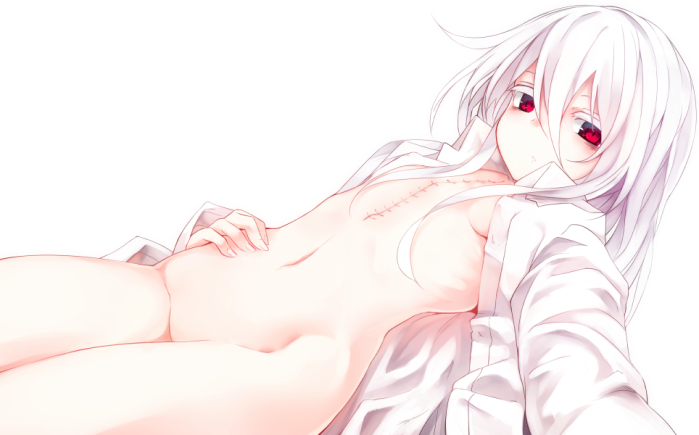 The woman brushed her long, black hair – streaked with more and more gray these days – while reading the report on the tablet laying on the countertop next to the sink. She had a small apartment in town, but like most of the other senior researchers, she usually spent the week in the company’s housing at the Institute. After being awoken by Ito’s panicked call this morning, she was profoundly glad she did.

She was two-thirds of the way through the report when she froze at “…subject then proceeded to systematically break its ribs away from its sternum (see diagram link here) following by using its left hand to remove its heart (see video segment link here).” She had no intention of biasing her mind with video prior to finishing the report. She turned away a moment to flip through the hanging white lab coats, making sure she retrieved the correct one. Ah. She glanced at the embossed name, ‘Junka Sato,’ just below the name and logo of her employer: Neuroi Company, just outside of Sapporo, in the northern island of Hokkaido, Japan.

She looked to read the next line. Her lab coat fell from her hand. “… at which point the subject consumed its own heart. Repeated viewings of the video (link here) have not conclusively determined if the subject was laughing or crying at the time.”

Her thumb hit the message tab. ‘On my way,’ she sent to Ito. She picked up her coat and walked quickly out the door and down the hall. She skimmed the rest of the report as she did. So, once the alarms started going off, the night-shift monitors did nothing; that’s about all they were good for, she thought.   It wasn’t until her deputy, Ito, got there thirty minutes ago that the subject was restrained – although she did not put up any resistance – and attempted to make . . . repairs. During which he dictated this report to her.

‘Images follow.’   She slowed for just a moment, but sped up again as she scrolled down. The first two were from the file: the body of the girl in her early teens they’d recovered from the hospital.   Long typically black Japanese hair.   Her eyes, taped open for the shot, were a light gray; obviously someone interesting up her family tree.

The next was from a few days after the installation of the SymCom unit, the symbiotic quantum processor. There were often physiological changes when the unit began to integrate and take control of a body. In the case, the hair turned white in a matter of hours. The eyes of this one, though, had remained the same. She kept scrolling, recalling what unfolded over the next three days.

The unit showed basic motor-reflexes, but only animal intelligence.   They already had two other of these idiot monkeys under observation, so she had made the decision to take the next step: the implantation of a macrobe. She recalled watching the Shinto priests through the glass, Ito standing next to her.   He called it magic; she called it Clarke’s Third Law. He called it a spirit; she thought macrobe more keeping with scientific terminology.   After the priests left and the room cleared, Ito pressed the button the released the restraints.

The change was obvious: the subject immediately sat up, looking about curiously. It looked at the through the glass. What the…? Had the SymCom unit just now gotten to the eyes? They were red.

It smiled. She’d felt Ito shudder next to her. The subject moved: swinging its legs off the table and standing. It moved to the door. Noting there was no handle, it ran its hands over the metal for a moment, then turned and walked to the window.

“Awwwk! Kek… raaah!”   It tried to speak. It seemed as surprised as they were by the sounds that came out of its mouth.

“Your processor has not yet mastered your vocal cords,” Junka Sato had said, toggling the microphone. “Do you understand?”

It smiled again, its red eyes oddly flat. It returned to the table, lay down, and was still.

“Maybe it’s tired?” Ventured one of the techs.

“Who knows,” Sato replied, shaking her head. She looked at Ito. “Call me if there are any problems.”

She shook her head, remembering her last statement from yesterday. What the hell had gone wrong? She badged herself into the lab.

The three techs and two other researchers jumped as they turned to see who came in. Their relief was obvious. “Situation?” She asked.   Doctor Suzuki pointed at the glass window.

The subject was on the table. Arm, leg, and neck restraints in place. Over it, in a hardened isolation suit, stood Ito. He was using sterile sheets to wipe off the last of the blood still on the torso.   Sato stared at the subject’s chest . . . what in the world . . . ?

“Are those staples?”   She asked, toggling the microphone.   Ito held up an industrial stapler just to his left.

“Seemed to be the quickest way,” he replied.

“Kah, kah, kah!”   It was the voice of a young girl, with an odd, guttural undertone. The subject?

Call that a ‘yes,’ she thought.

“I think not. You’ve badly damaged my test subject,” she looked at Ito, “and more importantly, I’ve my people in there with you.” She saw his shoulders drop slightly.

“We are a weak, little girl! No harm!   Release us!” The voice grated. She flicked the mic off and held up her tablet. She scrolled back to where the links for the videos were. She tapped it.

She almost dropped her tablet. The subject sat up and looked down at itself. It tore through the skin just to the left of the sternum. Pulling the flesh aside, it systematically began tearing its ribs from its breastbone.

If it can do that to itself, it can do it to one of mine. She was aware of the gorge rising in her throat, but she kept watching.

With a wrench of its left arm, several of the ribs were broken. As blood sprayed everywhere, it forced its left hand into the chest cavity.   With a sudden ninety degree twist of its wrist, it pulled the heart out . . . Sato’s hands were shaking so badly she could barely hold the tablet . . . and raised it to its mouth –

Mic back on.   “Ito! Get out of there. Now.”   He moved towards the door as tech hit the button for the door release. Sato lifted the cover of the failsafe –

“Gyaaaarrrkkk!”   The thing strained madly at the restraints. The door opened.

There was a crack.   Its left arm was free. There was a blur as it grabbed the neck restraint.   Ito was half through the door.

“Close the – !” She shouted. Another crack. It sat up.   It stared its red eyes right into hers.

“We will have you, Junka Sato!” With a jerk, instead of ripping the right restraint off, it simply tore its arm loose, leaving the hand behind.

She pressed the failsafe button.

It must have known about the chaingun directly above the table as it heaved itself off to the right, tearing its feet off in the process. The bullets missed. As the gas flooded into the room, it crawled to the window. Out of their line of sight for just a second, then it suddenly stood, a hand and bloody stump pressed to the reinforced glass.

“We will!” The face was spasming and the flesh starting to melt as the gas did its work. But the red eyes never wavered from her.

“Who are you?”   Sato asked, shaking. Its face almost just a skull now.

Its head fell forward onto the glass. The red faded. For just a moment, the eyes were gray again.

The subject collapsed to the floor as the last of its flesh melted.

There was utter silence for more than a minute. They jumped again as Ito stepped out of the antechamber into the control room. Sato took a deep breath.

“Alright. We’ve learned quite a bit from this experiment,” she said brusquely. “Once everything is cleaned up, we’ll – “

She stared at him as he walked past her and out the door. No one else moved.

“Well, then.   Doctor Suzuki?” The doctor flinched slightly at hearing her name.   “You said we’ve another subject for the next test?”

One thought on “Turning it up…”